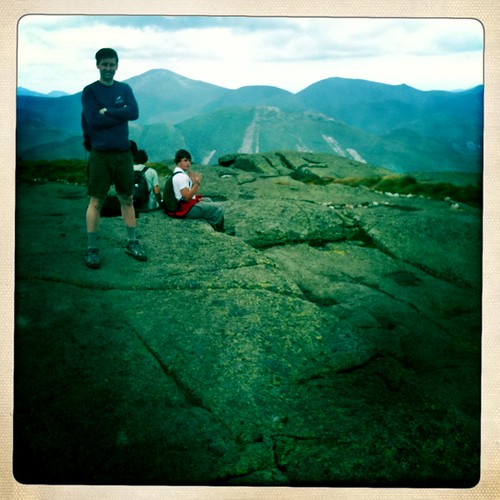 On top of Algonquin, originally uploaded by Dan Hewins.

This year so far, I have doubled the number of 46r peaks that I’ve climbed by adding Wright and Algonquin to the list (where Cascade and Big Slide have been since last year).

The climb to Algonquin and Wright was a long and strenuous hike. I set out with Hillary, Jim W., Liz V., Kat M., and Tom K., early in the morning. We stopped at the Noon Mark Diner to pick up breakfast to go and sandwiches for lunch. From there we drove to the Adirondack Loj at Hart Lake. We arrived around 9:20 to find that the parking lot was already full so we had to park the car about .6 miles down the road. We got on the trail at about 9:40.

The first 2 miles were not too bad. Some moderate climbs and some rocky trails but all in all, not too bad. It was after that that things began to get a little tougher. There were rocky trails and steep climbs with not too much respite between steep sections. The scenery was nice at times as we passed small waterfalls and creeks. At one point there was a cool looking “stone cobble” that we rested near and took pictures at.

At about 3.4 miles we hit the junction where the spur trail to Wright turned off to the left. This is where it got quite a bit harder. The .4 mile climb to Wright peak was steep and fairly tough. After we broke the tree line it got very windy with the wind blowing very hard at the top. We reached the peak at about 12:30pm. We rested for a while and talked with the steward whose job it is to be at the peak from about 10 to 4 every day. He is there to educate the hiking public about the delicate flora at the peaks of the Adirondacks. It’s rare plant life that can take a long time to grow there and any trodding upon by hikers can be very damaging. After a healthy portion of trail mix and a wind-shielded rest we made out way back down the .4 miles to the junction.

From there we contemplated the .9 mile ascent to Algonquin. It was much of the same steep, rocky terrain that characterized the climb to Wright, only much longer. I was fairly exhausted after reaching the peak of Algonquin at about 1:50pm, but I was really glad to have reached it. the top was a wide and expansive bare rock peak. It was crowded with other hikers as this is a pretty popular hike and it was a Saturday. There was another steward there that we chatted with for a bit as we ate our sandwiches. The views from the peak were spectacular in a 360 degree view.

The way down was the same as up except that it hurt the knees a bit more. We moved faster though. Jim and Liz both rolled their ankles but Liz was ok. Jim made it all the way down on his own but his ankle was really swollen and black and blue when he got down. (He’s going to see a doctor today.) We reached the trailhead ad about 4:30pm.

It was a great hike but we were all very tired at the end. Check two more off the list!