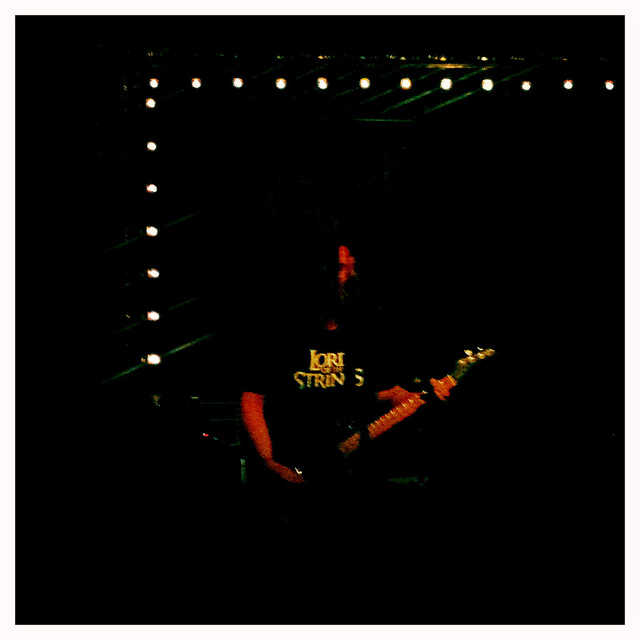 On the urging of a friend, Brad, I went to Union Pool last night with a soon-to-be-married friend, Hank, for the third night of a three night stand of Harvey Milk. I wasn’t disappointed.

Harvey Milk, and heavy, metal-ish music is not something I am all that familiar with. Lately, the closest thing to metal that I can claim honest appreciation and love for is the band called Earth. Brad had given me some of Harvey Milk’s music a couple years back and it sat, unlistened-to, in my iTunes until the announcement of these three shows. They’ve been around since the early 90s and I really didn’t know much about them other than some kind of cult-like following and Brad’s recommendation. I decided it was a thrice in a lifetime opportunity that I should take.

The opener was Luke Roberts. He played West Virginia Front Porch style music with an acoustic guitar and voice. His songs consisted of one progression repeated on the guitar and his singing. There was only ever one guitar part to the songs but the vocals and lyrics created verse and chorus. He was pretty good and at the end of his set had H.M. as his backing band for about three songs.

Harvey Milk was loud and quiet, angry and sweet, up and down. There were metal riffs, classic rock riffs, guitar solos,Â gutturalÂ vocals, and as-sweet-as-he-can-manage vocals. There even was a quiet period with an orchestral backing track. The ride was unpredictable and great. I was surprised at all turns. I was exhausted with jet-lag and was planning to leave early but after each episode of the show I was intrigued enough to stay for the next. The “Lord of the Strings” tee shirt was a clincher for me, too. All in all I like Harvey Milk.

So there you go, the second metal-ish band that I like. (That doesn’t count listening to Metallica while mowing the lawn at age 13.)