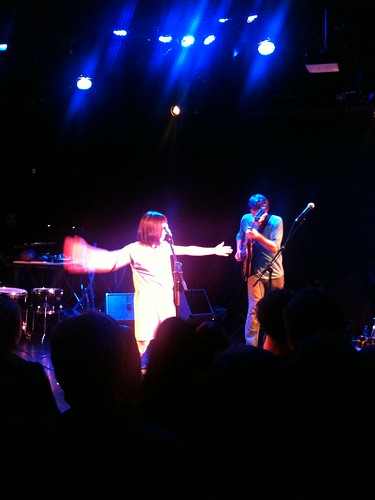 Deerhoof was awesome yet again. They never fail to rock and impress. This time Ed and John both played electric 12-string guitars. I saw them at the beginning and thought that they’d play them the whole time, because that’s what they do. And they did. I gotta say that the 12-string sounded really awesome and lush on some songs but on others (Dummy Discards A Heart, for example) they lacked the riffage precision. Still, it wasn’t so bad and that’s just nitpicking.

They unveiled a new song which is presumably on Deerhoof Vs. Evil and that was a good song. There were two covers in there but I didn’t recognize them (Martin did). Some of the hits were played as well. “Basket Ball Get Your Groove Back” was pretty much the only silly song they played. (And don’t get me wrong, I’m a big fan of Flower, Panda, Dog on the Sidewalk and all those.) This lineup of the band is great. I love the addition of Ed.

Here are the other iphone photos I took that evening.