Last night I attended night two of four nights of performances at the newly reopened Roulette performance space. Roulette has a long history dating back to a Soho loft in the 80’s and beyond and has recently relocated to Brooklyn. It’s a great space with a nice, big stage and a wrap-around balcony. I’ll definitely be going back there from time to time.

I leapt at the chance to see Anthony Braxton perform. I’d never seen him perform before and, from what I know, he performs fairly rarely within my reach. I’ve been listening to his music for many years now, and admittedly, it took me a while to get into it. It’s firmly in the avant-garde of jazz and can take a bit of getting used to. I still don’t even come close to understanding how it always works but I do like what I hear.

I chose to attend night two because of the format of the evening. He’s done some music for dance as well as some choral music, both of which are being presented on other nights of the run, but I am primarily interested in the instrumental type, which really makes up the bulk of his oeuvre. The program for the night was in two parts. The first set was a performance by the Diamond Curtain Wall Trio and the second set was a performance by the Tri-Centric Orchestra. 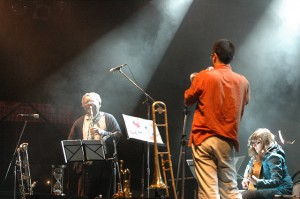 The Diamond Curtain Wall Trio is comprised of Anthony Braxton playing reeds of all sorts (last night he played five saxes: alto, soprano, sopranino, baritone, and bass), Taylor Ho Bynum playing brass of all sorts (I couldn’t identify everything but included were cornet, flugelhorn, trombone, and other sizes of trumpet-type things, one of which was gigantic), and Mary Halvorson on guitar (she played only one guitar).

The performance was basically an extended improvisation over the course of 45-50 minutes, timed by an hourglass which was ritually overturned at the start of the performance. They were, in fact, most likely playing a composition entitled “Composition 323c.” Â A similar composition is pictured here:

Composition 323c is described by Taylor as such:

In the DCW Music, Braxton combines intuitive improvisation with interactive electronics. The musicians in the ensemble respond both to the evocative graphic notation of his Falling River Music, and the unique and responsive electronic patches the composer designed using the SuperCollider programming software. Both the rich graphics of the Falling River Music and the complex algorithms of DCW Music’s SuperCollider patches are extraordinary examples of how Braxton has continued evolving into his fifth decade of music-making.

What this meant in practice, as I saw it last night, was a long and interesting improvisation. At times all three performers were playing and each subset of two played together at times, and each person had his or her own solo time. This wasn’t set up and planned, but flowed more or less organically as the performance unfolded. Anthony would, at times, decide to change the electronic music’s program and turn it up or off entirely. Some highlights for me were: Anthony on bass sax engaging in a one-sided argument, simultaneously screaming through and playing the beast of a saxophone; Taylor blowing water into his flugelhorn; Anthony on his soprano sax in a fit of circular breathing, emitting waves of rising notes over Mary’s support; Mary’s solo sections were also quite great. It’s hard to describe it past this. You can download a recent performance by the trio here. I enjoyed it thoroughly.

It was a large ensemble capable of creating some great noise.

You may notice that there are three conductors in the group. This is where it gets interesting.Â The orchestra was separated into sections: the strings and piano were the territory of Jessica Pavone; Aaron Siegel mostly manned half of the woodwinds and some brass as well as the drummer and guitar. Taylor was the “main” conductor who had control of the whole orchestra.

The program consisted of a few compositions (including 100, 134, and 92) along with “GTM” and “language music improvisations” (GTM stands for Ghost Trance Music). This is how it worked: Taylor started the set by the ritual overturning of the hourglass and started with what I think was language music improvisations. He made an “O” shape with his two hands together, showed it to the ensemble, then in a series of instructions, showed a number of fingers to the ensemble to indicate what I’m guessing was a type of language improvisation, like 1, 4, 7, etc. After showing the number, say 1, he’d then count off and conduct the group to play. 1, for example, was aÂ staccatoÂ note that was to be played on his cue. 4 was a legato note, also to be played on cue. It seemed as if the note could be any note the player chose. He also would section off the ensemble and instruct just a section in a certain way. He could, say, section off the strings, have them do something, then have the woodwinds do something else. He could also set sections off on their own, for example, he had the trumpets playing staccato notes the motioned to continue that as he moved to instruct another section. So, after a few language improvisation instructions, he then would take up a small dry-erase board, write a composition and section, say “100 G1,” show it to the group (or subset of the group) and count of for that section of that composition to be played. Again, he could conduct subsections in different ways, having the brass play one section and the strings another.

After some of this, the other conductors took charge of their own destinies. Jessica Pavone, put down her violin, rose, and turned to face her string section and proceeded to conduct them in an entirely different composition. Aaron Siegel would also do the same. In this way, there were multiple compositions and improvisations occurring at the same time. The conductors would work in such a way to not make it too messy, and it somehow would make sense. There were some parts that also seemed a bit like John Zorn’s “Cobra” game piece, where players could be instructed to follow the cues of another player, basically imitating them. To further the confusion, some sections could sometime autonomously break off and play some composition or improvisation, as often did happen. Taylor had the power to call an end to any of this activity, as his instructions seemed to takeÂ precedenceÂ over anything that was happening at the time. If this sounds like a giant mess, you could be right. I know a lot of people would not really tolerate the sounds that were emanating from the stage, but I was enthralled. It was beautiful, challenging, grating, inspiring, soothing, exciting, and happy all at different times or at the same time.

Anthony Braxton is an amazing musician and composer. I’m glad I was there last night.

One thought on “Anthony Braxton at Roulette”