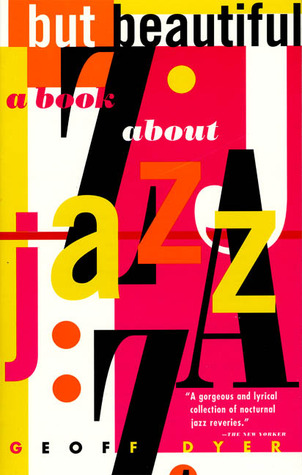 But Beautiful: A Book About Jazz by Geoff Dyer

This is a remarkable book. It’s one of the best pieces of writing that I have ever read, and it’s not just because I love Jazz. The approach of the writing is what I’d call unconventional because it claims to be neither fiction or non-fiction, which is a safe tack for the author to take. Even though, the book is not diminished by the author telling the reader all of this out in the preface; he says, point-blank, that it’s what he’s doing. He is attempting to tell the stories of a handful of jazzmen. These are intimate looks into the lives and feelings of these men, rendered in poetic and impressionistic prose, that would be impossible to represent as purely factual. However, the stories are meant to faithfully represent these men in factual and probable ways, but, again the story is told as if it were fictional. Meaning, some parts are written in the first person, others in the third, delving deep into the inner thoughts and desires of the person. Knowing what I was getting into I was not troubled by this tightrope walk between fact and fiction (as I feel I may have been had it been presented as non-fiction, or vice-versa, perhaps). It stayed far clear of anything like the “A Million Little Pieces” ‘scandal.’ As Dyer puts it in the preface, “As a rule, assume that what’s here has been invented or altered rather than quoted. Throughout, my purpose was to present the musicians not as they were but as they appear to me.”

The stories were moving and the writing poetic. It brought me into these people’s lives. I learned, at least, how Dyer imagines these men’s lives to be. And from what I knew about some of their personal lives, he attempted to render them (mostly) accurately.

Not only is the body of the book exceptional, the afterword is also some of the best critical music writing I’ve ever read.

I will most definitely read what else Dyer has written, no matter the subject. A most excellent book.

View all my reviews